The ACL knee ligament injury story is slowly changing.  There are some very positive highlights, some shockingly bad outcomes, and a few mixed observations. Here is an update from a recent meeting in Sweden, which included some of the world’s top ACL surgeons.

Positive:  Our understanding of ACL anatomy is improving. Some surgeons are discarding the old “bundle” theory, instead describing the ACL as a “ribbon” which twists with knee flexion.  This new model guides us in determining exactly where the ACL should be inserted, and should improve outcomes.

Negative: Using hamstrings as ACL replacements is rapidly declining in popularity.  The results are inferior to the use of either the patellar tendon or the quadriceps tendon.  Harvesting any tissue from the patient, however, produces long-term deficits in the knee.

Positive: A prospective, randomized, double-blind trial of a pig tendon called Z-Lig demonstrated equivalence to allograft patella tendon. This led to a CE (European Commission) mark of approval to sell the ligaments in Europe, South Africa and other countries.  This new off-the-shelf option eliminates the harvesting of the patient’s own tissue, with the associated pain and weakness.  A US FDA approved trial is about to begin as well.

Negative:  Fifty percent of people with ACL injuries go on to develop arthritis of the knee, despite reconstruction, after ten years.  Whether this is due to the harvesting of their tissues, genetics, abnormal mechanics or the trauma of the initial injury is not yet known.

Positive:  Preventive exercises and specific testing to identify functional weaknesses after ACL surgery has improved.  When employed, these tests and exercises help diminish the initial injury rate and determine the time when a return to sports is safe.

Negative: Using current techniques, the re-rupture rate in people under 20 years old is 30%. The risk of ACL injury to the opposite knee in the first two years after surgery is equally high.  This re-rupture rate, when combined with the rate of development of arthritis, highlights how devastating an ACL injury is—and how urgently we need new materials and methods for biologic stimulation to promote speedier and stronger healing.

Positive:  Biologic markers now can predict the development of arthritis, and may be a pathway for treatment that can positively influence the adaptive ability of collagen fibers.

Negative: Unless the knee is successfully anatomically stabilized with long lasting tissue, biomechanical forces usually will overcome the biologic repair mechanisms—except in those people genetically programmed to resist the degradation.

Mixed:  Osteotomy— surgical realignment of the tibia for ligament instabilities and arthritis—remain popular in Europe, with outcomes lasting around 10 years.  It’s much less accepted in the U.S., where ligament surgery is more often combined with replacement of the meniscus and repair of the articular cartilage.  The debate over which is superior is turbulent, and far from settled.

Mixed: Surgery immediately after an injury produces the same results as delayed surgery, with fewer associated meniscus injuries.  An early return to sports after ACL reconstruction has its advocates, who say that delay provides no advantage and causes economic harm to professional athletes.  The biology of healing, however, appears to show that ligaments take 12-24 months to fully remodel.  Most surgeons appear to be taking a more cautious approach, advising athletes to wait at least nine months before a return to sports —and only after completing functional tests that demonstrate power, agility, coordination and return of muscle girth. The NFL expects athletes to wait one year.

In summary:  ACL injury remains a devastating trauma for athletes.  While we have become knowledgeable about how to repair the injury, there remains much room for improvement.  Avoid the injury if you can.

ACL injuries to the knee have changed a lot over the past few years. Dr Stone explains how they are treated around the world - and how The Stone Clinic has great results with it's allograph treatment. 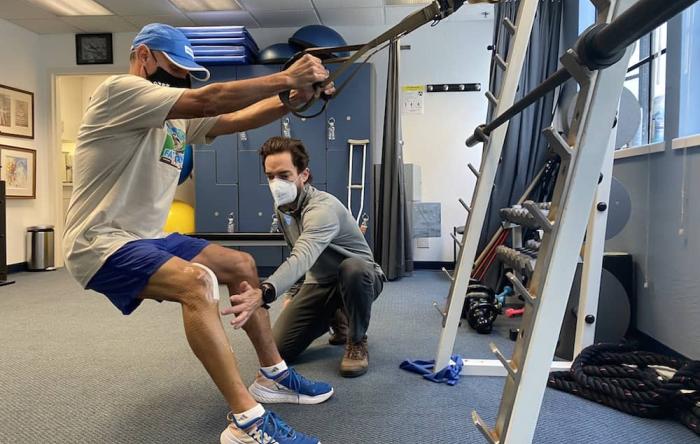 So many times patients present out of shape: They...
Blog