The meniscus is the key to knee joint health. Once torn, it loses its ability to distribute force and the knee joint it protects is doomed. Here is what’s new in the replacement field. 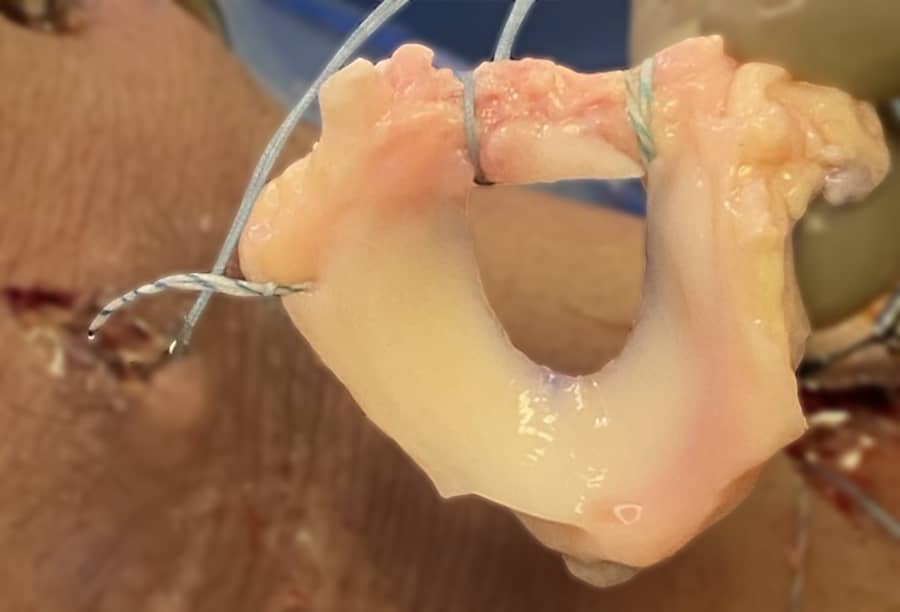 The meniscus is made up of interwoven collagen fibers interspersed with charged sugars and an assortment of specific fibrous cells. Its nutrition comes from two sources: a blood supply on its periphery and the synovial fluid which bathes all joints. Collagen, which is the most abundant protein in the body, requires that the charged sugars surrounding it absorb and release water to keep the fibers from tearing. The cells of the meniscus produce both the collagen and the surrounding matrix throughout your lifetime.

When healthy and intact, the meniscus absorbs the forces of walking and running, squishing water in and out of the tissue while stabilizing the knee joint. When torn, the forces of weight bearing are concentrated on a narrower part of the joint surface. The joint becomes less stable, much like a car tire that is out of balance. It wobbles a bit and wears out rapidly. For some people, the time from tear to arthritis is measured in months; for others, it takes decades. Regardless, the arthritis resulting from loss of the meniscus function is inevitable.

Menisci are torn over a million times a year in the US alone. This is commonly caused by sports, but can also result from simple flexion rotation activities like getting out of a low car seat. With aging, the composition of the charged sugars changes and the tissue becomes more brittle—less like a sponge and more like a piece of dry leather.

Replacing the meniscus has been my passion ever since I lost my own in college soccer. A mentor suggested that if I could figure out how to replace it, I would make a real contribution to orthopaedics and the world. In the 1980s, my team developed a collagen scaffold for re-growing parts of the meniscus. In the 1990s, we optimized the techniques for transplanting human donor meniscus to young people who had lost theirs due to sports or surgery. In the 2000s, we reported on the success of meniscus transplantation in people with arthritis (these people had joint pain, but were often too young for an artificial knee joint).

Over the years, artificial materials were tried as meniscus replacements. These generally failed, for a number of reasons. In young people, a strong enough artificial material would damage the healthy tissue opposing articular cartilage. In older people or those with arthritis, the rough exposed arthritic bone would chew up the artificial material too rapidly. Essentially, if the material was soft enough to absorb the forces of ambulation, it was not durable enough to last in the joint. Pig tissues have been tried (with the advancement of antigen stripping technologies), but are currently still in development.

Today, human donor meniscus (from young people who unfortunately die, most commonly in car and motorcycle accidents) remains the dominant meniscus replacement. But certain advances have occurred along the way. First, the surgical techniques for installing the meniscus into the knee have improved. Next, strategies for repairing the opposing articular cartilage using paste graft cartilage techniques have been optimized, making meniscus transplantation available to a wider group of people with knee pain. Third, the addition of injections of growth factors and Platelet-Rich-Plasma (PRP) are accelerating the rate of healing for the transplanted tissues.

Each of these improvements should theoretically make meniscus transplantation more common. But the tragedy remains that too many meniscus tissues are removed, too little insurance reimbursement exists to support replacement, and there exists too little knowledge of the most recent advancements in tissue repair. Because of this, my personal goal— of teaching all surgeons and having all patients undergo repair, regeneration, or replacement of the injured meniscus the moment their injury occurs—is still in the future.