The MCL is in the news. When Steph Curry’s knee stopped the fall of JaVale McGee in the game against the Atlanta Hawks, his knee bent inward with the tibia moving toward the opposite leg and the femur moving outward. A fibrous ligament, called the Medial Collateral Ligament, gave way. Here, anatomically and biologically, is what happened: 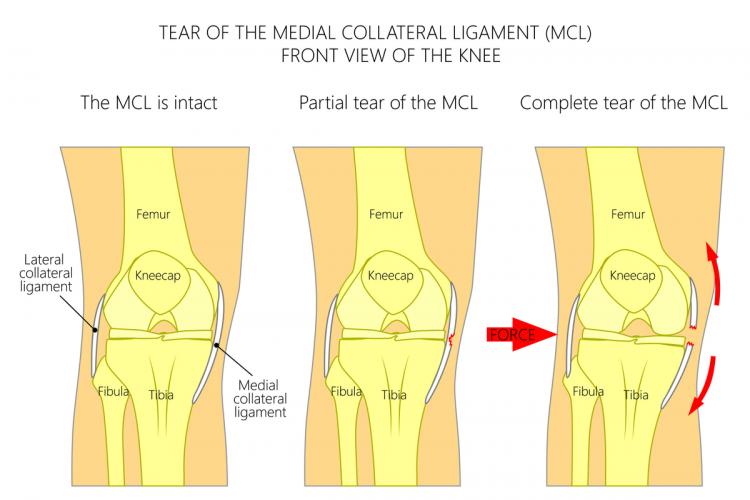 The MCL is a fan-shaped ligament. It inserts broadly along the inside of the femur, crossing the knee joint, and fanning out to form a strong attachment on the bone of the tibia. It has both a deep and superficial band. The collagen fibers of the ligament are a mixture of small and large diameter fibers, constantly refreshed by fibrous cells dispersed amongst them. Unlike the ACL within the knee joint, the MCL lies in a vascular bed of tissue, with blood vessels supplying the nutrients and oxygen that keep all tissues alive.

For the MCL to be injured, the fibers must be stretched past their breaking point.  The elongation can be a small one (a “Grade I” tear), where most of the ligament fibers remain intact. It is considered moderate (Grade II) when a predominance of the fibers are torn, and severe—a Grade III rupture—when the ligament is generally completely torn and no longer able to stabilize the joint.

Classically, each of these tears was treated in essentially the same manner. The belief was that since the MCL has such a good blood supply; if the patient wore a knee brace and rested the knee in 30 degrees of flexion, the ligament would heal within three to six weeks. Some patients would fail to regain stability of their knee; those people would either live with a loose knee or be brought to surgery for an MCL reconstruction.

When the ligament tear was associated with other injuries in the knee (such as a tear of the meniscus tissue which lies just deep to the MCL fibers or the ACL in the middle of the joint), prompt surgery was recommended to repair the meniscus and reconstruct the ACL. Still, the MCL itself was often ignored. Many an athlete was told they had the “Terrible Triad”: tears of the MCL, the medial meniscus, and the ACL. My practice includes many referred patients whose previous surgical care reconstructed the ACL and took out the torn the meniscus, but left the MCL alone. These patients went on to develop knee joint arthritis. They are now, a decade or two later, seeking to avoid a total knee replacement.

What’s revealing is that we now appreciate just how complex the MCL is, how important it is to help it heal normally, and how difficult it actually is to repair it surgically. Restoring the collagen fiber anatomy is the key to modern treatment. We have learned that all ligaments need a bit of tension to help those fibers align properly. They also need biologic stimulation in the form of growth factors and stem-derived cells to induce the body to form the proper mixture of small and large fibers.  We routinely inject these at the site of the tear.  Left alone, or braced in the traditionally relaxed 30 degrees of flexion, the MCL forms scar tissue with weak, disorganized collagen. Newer surgical techniques—which include internally bracing the ligament with artificial bands during healing—may or may not be helpful, as the internal braces of artificial material stress shield the healing fibers, reducing tension just when you need it.

What may be the best surgical approach—now in testing—is the use of resorbable braces or stents, which temporarily protect the healing ligament while new fibers are stimulated to form. Strategies for this approach include a cocktail of targeted growth factors, along with defined exercises that stimulate healing while not deforming the tissues.

In the meantime for those suffering a torn MCL, get thee to a doctor and participate in the healing process. Being weak-kneed is only for the timid.