Football players sit on the sidelines, sucking oxygen from masks and tanks; hip millennials lounge in oxygen bars, breathing bubbling oxygen through multicolored water canisters. Pooh-poohed by most experts as money-wasting (and possibly dangerous) psychological massage, oxygen bars are nonetheless expanding their reach, from dugouts to mountain spas. Why? 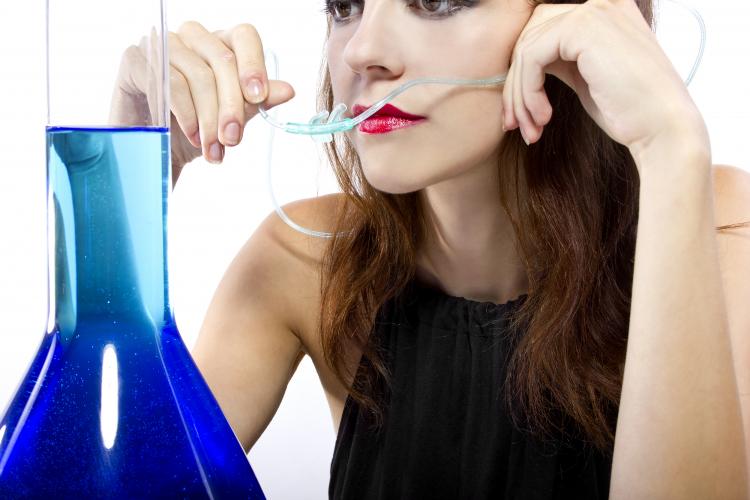 The science is simple. We normally breathe 20% oxygen from indoor air. At sea level, this saturates our blood cell hemoglobin to 98%—leaving little room for more. At altitude, the concentration of oxygen is the same, but the atmospheric air pressure is lower (you are farther away from the center of the earth, so gravity has less pull). Thus, you get less oxygen with each breath, and the saturation of the hemoglobin drops: usually to the low- to mid-90%’s for most healthy people.

Still, oxygen bars are popular. The concentration of O2 is only 40%, not 100%, and exposure is usually measured in 10 - 20 minute increments—not long enough to produce any damage. And, people love them. That’s because short intervals of oxygen do produce a “high” feeling. This is especially true when the O2 is combined with aromatic scents and definitely when you have a hangover (or an altitude headache). The air smells good, and the act of breathing slowly—closing your eyes and inhaling “purifying” air, with the resulting increase in hemoglobin oxygen saturation—produces a wonderful state of bliss. The endorphins released have not yet been measured in any scientific way, but ask any oxygen bar user why they spend $20 on air and they will tell you: The experience is dreamy.

This observation is not new. In Jules Verne's 1870 novel Around the Moon he states,

"Do you know, my friends, that a curious establishment might be founded with rooms of oxygen, where people whose system is weakened could for a few hours live a more active life. Fancy parties where the room was saturated with this heroic fluid, theaters where it should be kept at high pressure; what passion in the souls of the actors and spectators! What fire, what enthusiasm! And if, instead of an assembly only a whole people could be saturated, what activity in its functions, what a supplement to life it would derive. From an exhausted nation they might make a great and strong one, and I know more than one state in old Europe which ought to put itself under the regime of oxygen for the sake of its health!"

For those huffing and puffing on the sidelines of the football field, oxygen slows the breathing and provides confidence that the next round of contact will be answered with full force. The psychological effect is as powerful as the physical force that drives the legs, and it’s available instantly.

For those in search of urban refreshment, peering behind the curtain of that long zinc bar reveals the Wizard of O2. That extra shot of oxygen infuses customers with a dose of atmospheric bitters, a temporary shot of rejuvenation.

My advice? Use what nature gives us first, but feel free to have an extra helping sometimes, and radiate well-being. To paraphrase the song in the movie, “… if we only had more lungs…”