Athletes become patients when they get hurt. If and when they need surgery, it becomes obvious which athletes have cared for their bodies well and which have not—in which case trying to sterilize the injured area can be a challenge. Here are some tips to keep you clean from toe to head. 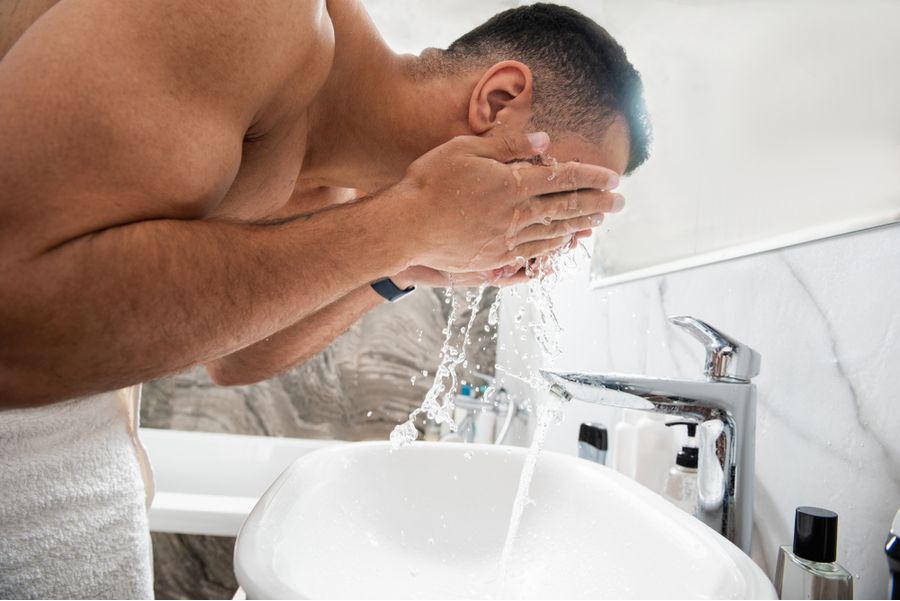 Toes: The nails should be kept short. The black you see in the gutters is loaded with fungus and bacteria that infest your socks and shoes, contaminating your shower and bathroom floor. Use a nail cleaner and a scrub brush on your toes. Between the toes lies the athletes’ foot fungus. These fungi are different from those on the skin and those between the nails. They have a nasty habit of recurring.  Use a onetime treatment like Lotrimen once every few months, especially between the fourth and fifth (smallest) toes. Powders are less effective. Drying that space with a clean towel after each shower or pool session helps keep the fungus at bay.

Skin: When we see scaly feet and smelly sneakers it is almost always a chronic fungal infection. Throw away the old sneakers and running shoes as they are impossible to clean. Use hot water and bleach on the socks, and treat the skin with a topical antifungal until clear.

Knees: Dirt-encrusted callouses over the patellar tendon and kneecap are common in people who work on their knees and those who play rugby on muddy fields. A scrub brush with plain soap works if used often. A few days of washing with a chlorhexidine soap, before any surgical procedure, clears away most bacteria.

Groin: Crotch hygiene in men and women varies widely. Your nose (or someone else’s) is an accurate testing method for bacteria or fungal overgrowth. Using a washcloth, and not just your hands, is most effective. Plain soap daily on the external genitalia, and nothing ever other than clean water inside the vagina, is the best and safest method. A hose shower sprayer or a toilet bidet is effective.

Armpits: Again, the nose is the ideal testing method. Here plain soap is not enough, because the hair follicles collect bacteria and the warm moist dark environment is the perfect culture media. Anti-bacterial soap with chlorhexidine, or plain soap followed by antiperspirant and deodorant, are the most effective preventive therapies.

Nose: Everyone forgets that the nasal hairs are the primary filter of the atmospheric contaminants entering the respiratory system. Don’t forget to clean that filter. A nightly washing, using a Neti pot with direct spraying of distilled water, markedly diminishes the bacterial and viral content, which in turn diminishes colds. Most important, nasal hygiene permits most people to breathe through their nose when sleeping, rather not through their mouth. Mouth breathing leads to dehydration, snoring, and poor sleep. Several patients were found to carry a resistant staphylococcus called MRSA in their noses, which correlated to joint infections at surgery. Daily nasal washing reduces that contamination.

Mouth: Mouth ulcers, poor dental hygiene, and bacteria that colonize the gums are all associated with post-operative infections, and possibly with other inflammatory diseases such as arthritis, Alzheimer’s, and cardiovascular disease. In addition to twice-daily tooth brushing, use an astringent mouthwash (e.g., Listerine) two to three times a day. This clears the secret deposits of sugar left behind after eating. That hidden sugar leads to plaque and gum disease, as well as the other sugar- and inflammation-based diseases we may be cursed with.

Head: While most athletes know to wash their hair—as their appearance may matter more than their cleanliness—few remember to wash their helmets. Whether it’s a biking, climbing or football helmet, the repeated rubbing of the helmet on the sweaty head leads to an overgrowth of bacteria in the helmet, and then onto the scalp and face. Most helmets tolerate a soaking in dish soap in the kitchen sink, which removes the offending agents.

So clean up to live well, and avoid the unnecessary infections we all fear.