Everything that moves on water is now designed to move on a foil. Why push through the water, when you and your vessel can ride above it, essentially flying? But along with these new possibilities for speed and fun come unique injuries—injuries that may be avoidable. 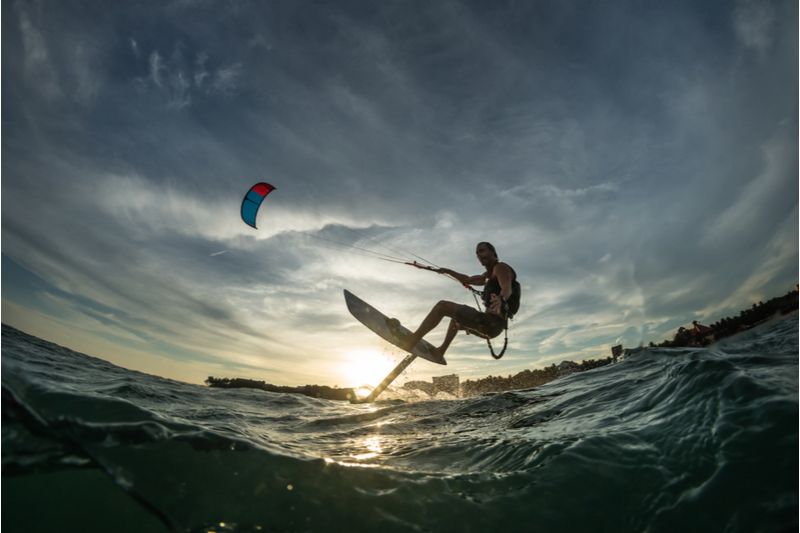 Hydrofoils were first introduced in 1869, by Farcot in Paris, and over the last century and a half, they have been modified for all types of watercraft. Most commonly seen on ferryboats, hydrofoils first made the leap from boat to board around 1963, with foiled waterskies by Woodward. In the mid-1990s, foils were attached to prone surfboards. About 1995—when Laird Hamilton used a foiled board in Hawaii—the surfing world took notice: A new level of speed was possible. Kai Lenny is often credited with developing the pumping technique of generating lift on a board without external power. By sequentially forcing, a back leg down behind the downward-pointing mast of the foil followed by a front leg pressure the rocking induces enough forward pressure to generate lift in the foil and raise the board above the surface.

The foils of today are nearly razor-sharp, carbon fiber, super lightweight, computer designed underwater wings. They are now part of virtually every wind craft. (Despite extensive military and commercial testing, most motor-driven boats have given them up. This is due to the complexity of the drive systems for elevated boats, and the difficulty in controlling their stability at speed.)

In San Francisco Bay, windsurfing and kite surfing on non-foiled boards has all but disappeared. Wind, kite, and now wing foil surfing is dominating the sport, opening new areas for sailing and dramatically lengthening the season, since very little wind (10 knots) is needed to get going. Where once the bay was crowded with board sailors from May until September, the entire year is now open—as long as it’s not raining.

So what’s not to like? Well, we are seeing a rash of previously uncommon injuries.

Let’s start at the bottom. Ankle sprains and foot fractures increased when kite surfing was introduced. Now, with dramatically higher speeds, falls with feet entrapped in the foot straps lead to high force injuries. These include more than the previously common anterior ankle ligament injuries. Ruptures of the ligaments between the bones (such as Lis-Franc’s tears) between the first and second metatarsals are now more frequent.

The shins seem to be magnets for the sharp edges of the foils. Where once a windsurfer would kick his or her legs beneath the board to “water start,” that action can now lead to a laceration on the leading edge of the foil. Since many of the fit sailors on SF Bay are older than 30—and often in their 50’s and 60s—their shins have little fat covering the tibia. Therefore, lacerations heal very slowly. Shin pads are advisable for newcomers.

Knee ligaments—which once suffered mainly from soccer and skiing—are now at the mercy of spectacular crashes at 20-30 knots. No brace can possibly prevent such injuries, and sometimes the ability to sail back to shore is compromised. Wise sailors now carry radios, or waterproof phone cases, to call the Coast Guard.

The shoulders, too, have a new nemesis: wing foiling. In wing foiling, the mast and boom of the windsurfer are left on shore, and the sailor holds a specially designed sail (also called a wing just to keep it very confusing) to generate power from the wind. As anyone who has tried to shampoo their own hair for more than a few minutes knows, holding your arms above your head is extremely tiring. Not only that; it’s a direct load on the rotator cuff tendons of the shoulder. The repeated lifting of the sail, from the sailing position at the side to the overhead position, potentially grinds those cuff tendons against the undersurface of the acromion: the bone at the top of the shoulder. Rotator cuff inflammation and tears are debilitating. And they’re all but guaranteed for avid older sailors with any arthritic damage in the shoulder.

Back, neck, and head injuries are typical of any high-speed sport. Fortunately, water is far more forgiving than the cement or dirt encountered by cyclists.

Wind foil sports do not require strength or power. But they do require care, brains, and coordination. Advance preparation, with flexibility classes, is my number one recommendation for all sailors. Flexibility will probably be the determining factor between getting injured in a twisting fall from a high-speed foil board and staying intact.

So before flying over the water, glide into the gym. Skip the weights and lie thyself down. Close your eyes and feel your muscles, tendons, and joints. Test their limits. If you can expand those boundaries, you will foil the need for surgery.